Home Practices Faith The Second Part of the Testimony: Prophet Muhammad PBUH is the Messenger...

We all know that to enter into the fold of Islam one should bear witness that no one is worthy of worship or there is no deity to be worshiped except Allah alone and that Prophet Muhammad (PBUH)  is His Messenger, Prophet and His Slave. The importance of the first part of this testimony known to us and it has been explained in various articles by many writers in detail. But it is very important to understand the meaning and the implications of the second part of the testimony too. In fact, sometimes most of us stray from the Right Path and even from Islam itself because we are not implementing the second part of this testimony in our lives properly.

Allah sent His Messenger Muhammad (PBUH) with guidance and the religion of truth, that He may make it superior to all religions. The testimonial “Muhammaddun Rasulullah” asserts that Muhammad (PBUH) is the Messenger and the Prophet of Allah and this testimony requires to be reside in the heart of every Muslim. This part of the testimony has four basic implications.

It is necessary and obligatory for every individual to believe in the Messenger of Allah (PBUH) and the revelation that he brought from his Lord. Allah the Glorious says: “So believe in Allah and His Messenger and the Qur’an which We have sent down.” (At-Taghabun 64:8). Similarly, there are many verses in the Book of Allah which show the obligation and necessity of believing in His Messenger Muhammad (PBUH) and in the news that he delivered.

The Sunnah of the Prophet Muhammad (PBUH) also emphasizes on such obedience and confirms its necessity. The Prophet (PBUH) himself urged his Ummah to obey and follow him and be aware of the bad results of his disobedience. It is narrated from Abu Hurairah (May Allah be pleased with him) that the Prophet (PBUH) said: “All my followers will enter Paradise except those who refuse.” They (the companion) asked: “O Allah’s Messenger! Who will refuse?” He said: “Whoever obeys me will enter Paradise, and whoever disobeys me is the one who refuses (to enter it)” (Al-Bukhari 7280).

In addition to it, Allah commanded us to avoid all of what the Prophet (PBUH) has ordered us to refrain from. Allah the Exalted says: “And whatsoever the Messenger (Muhammad PBUH) gives you, take it, and whatsoever he forbids you, abstain (from it)” (Al-Hashr 59:7). The Messenger of Allah (PBUH) has strongly advised us to be obedient in all commands and prohibitions: “If I command you to do something then do as much of it as you can, and if I forbid you to do something, then refrain from it.” (Muslim 1337).

The last implication of this part of testimony is to worship Allah alone through the acts of worship that the Prophet (PBUH) has allowed and legislated. This implication also requires to shun all kinds of innovations in the religion and abandon all statements and opinions that contradict the Prophet’s Sunnah, no matter how knowledgeable those who said these statements and opinions are. Each one of them and us will have some of what we say accepted or rejected, except the Prophet of Allah (PBUH). Because the Holy Quran confirms his statements by saying: “Nor does he speak of (his own) desire. It is only an Inspiration that is inspired.” (An-Najm 53:3, 4). And acting upon his statements and commandments; there is a true guidance for the whole humanity and the world. On the other hand, Allah warned us from disobeying him, opposing his commandments and going against his statements and teachings. He says: “And let those who oppose the Messenger’s (Muhammad PBUH) commandment (i.e. his Sunnah legal ways, orders, acts of worship, statements, etc.) (Among the sects) beware, lest some Fitnah (disbelief, trials, afflictions, earthquakes, killing, overpowered by a tyrant, etc.) befall them or a painful torment be inflicted on them.” (An-Nur 24:63).

Imam ibn Kathir (May Allah have mercy on him) writes about this verse: “This meaning going against the commandments of the Prophet Muhammad (PBUH), which is his way, methodology and Sunnah. All words and deeds will be measured against his words and deeds; those that are in accordance with his words and deeds will accepted, and whatever does not match up will be rejected, no matter who the person is who said and did them.”

We ask Allah to guide us to the Right Path and to make us among those who act upon the Sunnah of the Prophet (PBUH). We beg Him for forgiveness, for He is the Oft-Forgiving and The Most Merciful. Ameen 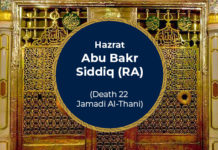 Are the Frequent Earthquakes the sign of end times?

The Prophet Muhammad (PBUH) As a Teacher- An Overview