Home Islam Hadith The Science Behind the Classification of Ahadith

Have you ever wondered how ahadith are classified? How and when did the process of documenting hadith begin? This blog hopes to answer all these questions.

When Allah Almighty sent Syyadna Adam to this earth, he commanded him:

This is the historical background and the beginnings of the divine revelations and commands that Allah sent to His messengers in different periods. Without Messengers, people would not be able to know their identity, the purpose of their creation, their livelihood, their lifestyle and so on.

If you know about the theories about human history, you will know that all these theories have been introduced only by those who have not been linked to Allah’s revelation and His commandments. If these people had followed the revelation, they would not have needed these ideas rather they knew the facts very early.

The commands and even hadith that Allah has given to us human beings have two main purposes. On the one hand, these human beings, as creatures, remain to pay homage to their Creator, Allah Almighty and remain to worship Him, and on the other hand, they should be taught the rules and regulations of living on this earth so that they may avoid ignorance, oppression and sin. As a result, they would succeed in the hereafter and enter the paradise of Allah.

The Holy Quran reveals this fact that when humans started spreading mischief on this earth and started committing the greatest sin ever, i.e. polytheism, then Allah Almighty sent His first messenger, the Prophet Noah (peace be upon him) to his people to warn the people about the torment of Allah Almighty and to give them the good news of Paradise from which their forefather, Sayyadna Adam was expelled.

The Holy Quran mentions that this chain of messengers remained till Allah’s last messenger Muhammad ﷺ and there would not be another messenger after Muhammad ﷺ till the day of judgement.

Of all these prophets and messengers عليهم السلام, some were given books by Allah, some were given scriptures, some were given commands only through revelation which was not in written form. Allah Almighty also bestowed miracles on all of them according to the requirements of their time and place.

All Muslims believe that the Holy Prophet Muhammad ﷺ is the last Messenger of Allah Almighty and no other Messenger will come after him. In this sense, the religion of the Prophet ﷺ is a guide for the people till the Day of Resurrection. This means that’s the teachings and hadith of the Prophet ﷺ are so comprehensive that this religion would solve the needs and problems of all kinds of people from various fields of life. This has been happening for the last fourteen hundred and fifty years and will continue till the Day of Judgment.

Indeed, Allah has done the believers a ˹great˺ favour by raising a messenger from among them—reciting to them His revelations, purifying them, and teaching them the Book and wisdom. For indeed they had previously been clearly astray.

This verse reveals that Allah’s Messenger ﷺ was given two things, the book and al-Hikmah. “The book” means Allah’s last book, the Holy Quran and “al-Hikmah” means the Prophet’s ﷺ Sunnah which is also referred to as his Ahadith.

Here it is necessary to mention that the enemies of Islam are always keen to cast aspersions upon the religion of Allah in various ways and by various means. They spread their specious arguments and misguidance among the ordinary Muslims and are eventually followed by some of those among the Muslims who are weak in faith or ignorant. If one of these ordinary people were to give the matter a little thought, he would realise that their specious arguments are invalid and their argument is worthless.

One of the easiest ways in which the ordinary Muslim can refute this flimsy specious argument is to ask himself: How many rak‘ahs do I pray in Zuhr? What is the minimum threshold at which Zakat becomes obligatory? These are two simple questions that no Muslim can do without knowing the answer to, but he will never find the answer to them in the Book of Allah. This is where the role of the hadith comes in. We will find that Allah instructed us to pray and He instructed us to give zakaah, but how can he carry out these commands without looking to the Prophet’s Sunnah and hadith? This is impossible. Hence the Quran needs the Sunnah more than the Sunnah needs the Quran As Imam al-Awza’i رحمه الله said:

The Sunnah (Hadith) was not recorded during the time of the Prophet ﷺ just as the Quran was written. Rather, it was preserved in the books, and the Companions transmitted it verbally to those who followed after them, except for some of the companions that had newspapers in which they recorded some of what they heard from the Messenger of Allah ﷺ. Abdullah bin Amr, and Omar bin Al-Khattab رضي الله عنهما thought of writing the sunnah (hadith) down but then changed their mind.

The first person to order to collect them was Umar bin Abdul Aziz رحمه الله, and he sent to Abu Bakr bin Hazm رحمه الله his handler and judge over to Madinah, and said: See what was from the hadith of the Messenger of Allah ﷺ and write it, for I feared the loss of knowledge, and passing the scholars away.

But he (Abu Bakr bin Hazm رحمه الله) did not record all of the Sunnah and ahadith that were in the city of Madina, this was done by Imam Zuhri رحمه الله. He was a contemporary of Umar bin Abdul Aziz رحمه الله and he (Umar bin Abdul Aziz) used to advise his sitters to go to him, because there was no one left on the face of the earth who knew the Sunnah better than him, so he wrote down all the hadiths and sayings of the Companions of the Holy Prophet ﷺ. Thus Al-Zuhri was the first to lay the foundation stone in the codification of the Sunnah, then the codification became popular in the next generation of Al-Zuhri.

So, after Imam Zuhri رحمه الله, hadith was collected in Makkah city by Ibn Juraij, Ibn Ishaq, and in Medina city by Saeed Ibn Abi Orouba, Al-Rabee`, Imam Malik, and in Basra city by Hammad, And in Al-Kufa city by Al-Thawri, in Al-Sham (Syria) Al-Awza’i, and so on.

Then came the third century, and it was the brightest of the ages of the collection of the Hadith. Then the Musnad was classified as the Musnad of Imam Ahmad, the Musnad and Ishaq bin Rahwayh, then the Sahih: Bukhari and Muslim, then the Sunnahs were compiled by Abu Dawud, Al-Nasa’i, Ibn Majah, and Tirmidhi.

The book which consists of these eight topics is called Jame`. These kinds of books cover almost all kinds of hadith and sayings regarding every aspect of life.

Knowing this classification can help us understand the difference between the ahadith and how the chain of transmission occurs.

According to the correct belief of the Muslims, every sahih hadith is able to be acted upon. There are many sects that raise the issue of whether every sahih hadith should be acted upon or not. Some believe that if a hadith does not reach the limit of “mutawatir”, it will not be acted upon and will be rejected. Some mention very hard conditions and believe that if these conditions are included in a hadith, it would be acceptable otherwise it would be rejected. All these theories have been rejected by the great and expert Imams of hadith.

Among the recent  Imams, there is also a very famous Imam of Syria, Shiekh Muhammad Nasir-ul-din Albani who has classifed a large number of hadiths separately. His most famous books in this regard are Al-Sahihah and Al-Daeefah. In Al-Sahihah, he has mentioned all sahih hadith with lard detail as well as in Al-Daeefah, he has mentioned all non-authentic ahadith. Although there is also a large criticism of these books, yet they are still considered helpful.

Take a look at the hadith collection available on Darussalam Store.

Take a look at some of our bestseller ahadith collections.

Imam Muslim and his Contributions to the Muslim Ummah 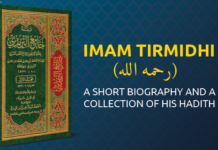 6 Conditions and Prerequisites for Hajj That Every Pilgrim Must Know

The Night of Power in Ramadan

The Noble Quran as a Cure (Shifaa)