Home Islam Hadith Imam Tirmidhi رحمه الله -A Short Biography and a Collection of His...

The personalities whom Allah Almighty chose to serve His religion; Islam their pioneers are the Muhadithin to whom Imam Tirmidhi رحمه الله belongs.

One of the greatest thinkers of Central Asia is the famous scholar Imam Tirmidhi. His full name is Abu Isa Muḥammad ibn Isa as-Sulami aḍ-Ḍarir al-Bughi at-Tirmidhi who was born in 209 A.H and died in 279 A.H.

He was born in 209 A.H in Termez which is located in the southern part of Surkhandarya region in Uzbekistan, in a poor family. His youth was spent in Termez, where he received his first education. In his childhood, he had extraordinary intelligence, vigour and memorable abilities, Tirmidhi took a keen interest in various disciplines, especially hadiths, and visited many Eastern countries in order to continuously improve his knowledge. He lived in Iraq, Isfahan, Khurasan, Makkah and Medina for many years.

Throughout his many years of journey, Tirmidhi was taught by various scholars – the great scholars of his time – from qiraat (the science of reading), bayan (the science of explanation), fiqh, history, and in particular in hadith in his childhood.

According to sources, Imam Tirmidhi used every opportunity to collect and study hadiths. He immediately wrote down the hadiths he had heard from his teachers and narrators, whether it was on his travels or anywhere else.

Imam Tirmidhi taught many students who were the leading scholars of the time. Returning from his travels , Imam Termizi gained fame as a major scholar in his own country and engaged in creative work and apprenticeships. He died in 279 A.H. in the village of Bugh, not far from Termez, where he was buried.

The Works of Imam al-Tirmidhi During his life:

This work also has other names such as “al-Jami’ al-Sahih” (Reliable Collection), “Al-Jami’ al-Kabeer” (The Great Collection), “Sahih al-Tirmidhi”, “Sunan at-Tirmidhi”. This work is considered as one of the six books (Kutub al-Sittah – the six major hadith collections).

One of the great works of the author is Shama’il Muhammadiyah (popularly known as Shama’il at-Tirmidhi and Ash-Shama‘il An-Nabawiyyah wa Al-Fada‘il Al-Mustafawiyyah), a compilation of hadiths concerning the person and character of the Islamic prophet, Muhammad ﷺ.

Imam At-Tirmidhi was also well versed in Arabic grammar, favoring the school of Kufa over Basra due to the former’s preservation of Arabic poetry as a primary source.

“Al-Jami’ as-Sahih”:( Ahadith collection) Publications and Commentaries Al-Jami` as-Sahih is one of the most important books in the Islamic world.

According to Hafiz Ibn Hajr al-Asqalani, al-Tirmidhi wrote this work in 270 A.H. , when he was about sixty years of age, after having gained considerable experience in science and becoming an imam. Manuscripts of this work have been preserved in many cities around the world, as well as in the Academy of Sciences of Uzbekistan, Oriental Studies Institute named after Abu Raykhan Biruni.

Al-Jami` as-Sahih has been repeatedly published as an important source. Several commentaries were written for this work such as

It should be mentioned that the third century of the Hijri (ninth century AD) is a golden period in the development of the science of hadith. The fruitful work of scholars like Imam al-Bukhari and Imam Muslim, who lived and worked at that time, is of great importance. Abu Isa Tirmidhi made a great contribution to the hadiths. The process of collecting and sorting them was majorly initiated by his teachers and mentors: Imam Bukhari and Imam Muslim. Eventually, Imam Tirmidhi became one of the most influential scholars in the Muslim world.

Al-Jami` as-Sahih plays an important role in hadith. The author divides his work into separate chapters and, whenever possible, quotes each hadith. After each hadith, it specifies the degree of reliability or weakness.

One of the main reasons to name this book “Sunan” is that it contains a great deal of hadiths concerning fiqh. In addition, there are many hadiths about discipline, ethics, and good manners in the work, and it is not an exaggeration to say that hadiths of this level are not found in any author’s work. Structurally, the work is divided into the following chapters:

The work has been divided in to a number of chapters covering different topics. Each chapter cites multiple ahadith that reflect the contents of the chapter. It also includes views of other scholars on the same subject manner.

The hadith then transmits its relation to the level of:

Then he would comment on the hadith narrators, the chain of transmission, and the evidence of the hadith.

As an example, Imam at-Tirmidhi said after a hadith:

“This hadith is authentic (sahih) and hasan. The hadith narrated by Al-Hakam ibn Utayba and Hammad Ibrahim al-Nahai from Abu ‘Abdullah al-Jadali and from Khuzaima ibn Thabit is not authentic. Ali ibn al-Madini reports: Yahya ibn Sa’id told me that Shu’ba said to him: Ibrahim al-Nahai never heard the hadith about ‘Mash’ from Abu Abdullah al-Jadali. Zaida relates what he heard from Mansur: We were sitting in the room of Ibrahim al-Tayami and Ibrahim al-Nahai was with us. Ibrahim al-Tayami narrated to us a hadith from ‘Amr b. Muhammad ibn Ismail al-Bukhari said: The best hadith in this section is the hadith narrated by Safwan ibn Ussal. Abu Isa at-Tirmidhi said: This word in the Mash is the words of most of the Prophet’s companions and followers, and of those who came after them, such as Sufyan, Ibn al-Mubarak, al-Shafi’i, Ahmad and Ishaq. They said: Three (days) for the traveler, and one day for the resident. Some scholars reported that the prophet did not set a period of Mash. This is the saying of Malik ibn Anas. Abu ‘Isa al-Tirmidhi said: It is right to set a time limit of Mash and follow it. Indeed, this hadith was narrated by Safran ibn Ussal, as mentioned before.”

So, the author relates the opinions of the narrators, the companions and other scholars close to the Prophet ﷺ. It is easy to imagine that such a study of the several thousand hadiths included in the work required hard work, patience and will. For example, many of these hadiths in al-Tirmidhi’s books show his unique search. The author himself also wrote about this work: When I finished writing Al-Jami` as-Sahih, I showed it to the scholars of Hijaz, Iraq and Khorasan, and they gladly accepted it. He said: Indeed, whoever has a book in his house, it is as if the Prophet ﷺ himself was speaking in this house.

Take a look at the books available at Darussalam on Tirmidhi’s collection.

Imam Muslim and his Contributions to the Muslim Ummah 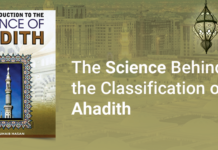 The Science Behind the Classification of Ahadith

Loving and hating for the Sake of Allah

Dictionary of Islamic Words and Expressions

The Etiquette and Manners of Gathering in Islam