Who were the wives of the Holy Prophet ﷺ, also known as the mothers of believers? What were their lives like and what role did they play in the spread of Islam?

The Holy Prophet ﷺ had a total of 11 wives in his life and 9 in a time. He was 25 years old when he married Sayyida Khadija رضي الله عنها when she was 40 years old. All of the other marriages were conducted after her death.

The names of the wives of the Prophet  ﷺ were as below:

She was the first of his wives. The Prophet ﷺ married her when he was twenty-five years old, and he did not take another wife until after she died. All the Prophet’s ﷺ children were born from her, except Ibraaheem.

Imam Al-Bukhaari entitled a chapter in his Saheeh (3815): “The marriage of the Prophet ﷺ to Khadija رضي الله عنها, and her virtues,” in which he narrated a hadeeth from ‘Aa’ishah who said: “I never felt jealous of any of the wives of the Prophet ﷺ as I did of Khadijah, although she died before he ﷺ married me, because of what I heard him say about her.”

The Prophet ﷺ married her in the tenth year of his Prophethood. (Tabaqaat Ibn Sa’d, narrating from al-Waaqidi, 8/52-53; Ibn Katheer in al-Bidaayah wa’l-Nihayah, 3/149)

Hazrat Sawdah رضي الله عنها had a particular love for the Holy Prophet صلى الله عليه وسلم. Hazrat Sawdah رضي الله عنها has narrated five Ahadith on the authority of the Messenger of Allah ﷺ, of which two have been recorded in Bukhari and Muslim and the rest have been recorded in Abu Da’ud and Nisai. Hazrat Ibn Abbasra and Yahya bin Abdul Rahmanra narrate from her

The Prophet ﷺ married her in Ramadan, thirty-one months after the Hijrah. (Tabaqaat Ibn Sa’d, 8/115 ) Umm al-Masakin was her nickname. She was generous to the poor and needy. That is why she became famous with this nickname. His first marriage was to Obaidah Ibn Harith رضي الله عنه who was martyred in the Battle of Badr. After that, she got married to the Holy Prophet ﷺ for 400 dirhams. After Hazrat Khadija رضي اللہ عنھا, only he died in the life of the Holy Prophet ﷺ.

Imam Muslim narrated in his Sahih (918) that Umm Salamah رضي الله عنها said: I heard the Messenger of Allah ﷺ say: “There is no person who is faced with a calamity and says:

(Truly, to Allah we belong and truly, to Him we shall return; O Allah, reward me this calamity and compensate me with something better than it)

How did she come to be the wife of the Holy Prophet ﷺ? She fell prisoner to the Muslims during the battle of Banu Al-Mustaliq, and she came to the Prophet ﷺ to ask him to help her to manumit herself and buy her freedom. He offered to buy her freedom and marry her, and she accepted. The Prophet ﷺ married her and made her manumission her dowry. When the people came to know of that, they set free their own prisoners, so as to honour the in-laws of the Messenger ﷺ. No woman brought a greater blessing to her people than she did. (Narrated by Ibn Ishaaq with a hasan isnaad. Seerat Ibn Hisham, 3/408-409.)

Concerning her Allah revealed the words:

“So when Zayd had accomplished his desire from her (i.e. divorced her), We gave her to you in marriage, so that (in future) there may be no difficulty to the believers in respect of (the marriage of) the wives of their adopted sons when the latter have no desire to keep them (i.e. they have divorced them)”

She used to boast about this to the other wives of the Holy Prophet ﷺ, saying: “Your families arranged your marriages but Allah arranged my marriage from above the seven heavens.” (Sahih Bukhari: 7420)

Abu Dawood (2107) narrated from ‘Urwah from Umm Habibah رضي الله عنها that she was married to ‘Ubayd-Allaah ibn Jahsh, who died in Abyssinia. Then the Negus married her to the Prophet ﷺ and gave her a mahr of four thousand on his behalf, and sent her to the Messenger of Allah ﷺ with Shurahbeel ibn Hasanah.

It was narrated from Ibn ‘Abbas رضي الله عنهما that the Prophet ﷺ married Maymoonah when he was in ihram. (Narrated by al-Bukhaari, 1832; Muslim, 1410)

The words “when he was in ihram” are a mistake. In fact the Prophet ﷺ married her after he exited ihraam following ‘Umrat al-Qada’ and that’s how she became one of the wives of the Holy Prophet ﷺ.

The Messenger of Allah ﷺ set her free and married her after the battle of Khaybar. (Narrated by al-Bukhaari: 371) Safiyyah رضي الله عنها was the daughter of Huyayy ibn Akhtab, the undisputed leader of the Banu al-Nadir as well as a Jewish rabbi. Hence, she was of noble regal and rabbinical heritage. She became a captive of the Muslims when they seized al-Qamus, the fortress of Khaybar. When a Companion of the Prophet ﷺ heard of Safiyyah’s captivity, he approached the Prophet ﷺ with a suggestion that since she was a lady of Banu al-Nadir, only the Prophet ﷺ was fit enough to marry her. The Prophet ﷺ agreed to this suggestion and hence granted her freedom and married her.

This significant act of marrying Safiyyah رضي الله عنها was indeed a great honour for her, for this not only preserved her dignity, it also prevented her from becoming a slave.

These are the wives of the Holy Prophet ﷺ with whom he consummated marriage. Two of them died during the lifetime of the Prophet ﷺ, namely Khadijah and Zaynab bint Khuzaymah رضي الله عنهما. The Messenger of Allah ﷺ left behind nine wives when he died; there is no difference of scholarly opinion on this matter.

It was said that Rayhaanah bint ‘Amr al-Nadariyyah (or al-Quraziyyah) was also one of the wives of the Holy Prophet ﷺ. She was taken prisoner during the battle of Bani Qurayzah, and the Messenger of Allah ﷺ chose her for himself and married her, then he divorced her then took her back. (Tabaqat Ibn Sa’d , narrating from al-Waaqidi, 8/130)

And it was said that she was a concubine. This was regarded as more likely by Ibn al-Qayyim in Zaad al-Ma’ad.

Some people accuse the Holy Prophet ﷺ of being hypersexual because he had eleven wives but they forget the fact that he married the rest after the death of Sayyida Khadija رضي الله عنها. If you study the life history of the Prophet ﷺ, only two of his marriages one with Khadija رضي الله عنها, and the other, with Aisha رضي الله عنها were marriages conducted under normal circumstances. All his other marriages were contracted as a necessity and were based on various considerations. This topic has been widely solved in Islamic Literature and a lot of discussions have been done on the wives of the Holy Prophet ﷺ.

All the aspects and considerations which arise in people’s mind was big cause to compile a book on the wives of the Holy Prophet ﷺ and clear the misconceptions and highlight the importance and need of the Prophet’s ﷺ marriages and their benefit to this Ummah. With the great help of Allah Almighty the team of senior research scholars of Darussalam Research Center compiled a book by the title of The Honorable Wives of the Prophet ﷺ which would reveal the topics of:

There is a lot to learn from these great women of Islam. A lot of lessons and morals can be learnt from studying their lives.

Here are some extracts from the book for the readers’ ease:

Extract 01: Read an extract from the biography of Sayyida Khadeejah رضي الله عنها

The Messenger of Allâh (ﷺ) returned from Ash-Sham, having sold the goods he had taken with him and bought the things he required and when he came to Khadeejah (رضي الله عنها) and she sold the things he had brought, she found that her profits were double what they normally were. Maisarah informed her of the good character he had observed in the Prophet (ﷺ) and he informed her also of what the monk had said and how the clouds had sheltered him from the fierce heat of the sun. Khadeejah (رضي الله عنها) was a resolute, intelligent and noble woman when she heard what Maisarah had to say, she sent a message to the Messenger of Allâh (ﷺ), saying: “O, cousin! I have conceived a desire to marry you, due to your kinship, your nobility among your people, your trustworthiness, your good character and your truthfulness. When Khadeejah (رضي الله عنها) offered herself in marriage to the Messenger of Allâh (ﷺ), she was the noblest and richest of the women of Quraish and all of the men among her people were keen to marry her-if only they could have found a way to do so. After Khadeejah (رضي الله عنها) had presented her proposal to the Messenger of Allâh (ﷺ), he informed his uncles of what she had said and they agreed to his marriage with her, then his uncle, Hamzah went to the house of Khuwailid bin Asad, her father-and made the proposal of marriage to her. The marriage then took place and the Prophet (ﷺ) presented her with a dowry of twenty camels. She was the first woman the Prophet (ﷺ) had married and he did not marry any other until after her death.

Her Lineage: She is Ramlah bint Abu Sufyan bin Sakhr bin Harb bin Umayyah bin ‘Abd Shams bin Qusai; her lineage is connected with that of the Prophet (ﷺ) through their common ancestor, Qusai. She was born seventeen years before the start of the Prophetic Mission and she was married to ‘Ubaidullah bin Jahsh Al-Asadi, the brother of Zainab bint Jahsh, the paternal aunt of the Prophet (ﷺ). When ‘Ubaidullah embraced Islam, Ramlah embraced Islam with him. Her father, Abu Sufyan bin Harb was at that time still a disbeliever, for he did not become Muslim until the day of the conquest of Makkah, in the year 10 A.H. He was extremely angered by her embracing Islam and she became the object of his wrath and resentment. When the oppression inflicted on the Muslims by the disbelievers increased to unbearable levels and the Messenger of Allâh (ﷺ) permitted them to migrate to Abyssinia, ‘Ubaidullah and Ramlah (رضي الله عنها) migrated there. At that time, Ramlah (رضي الله عنها) was pregnant and it was Allâh’s Will that she should deliver in Abyssinia and in time, she gave birth to Habeebah, from whom she took the agnomen Umm Habeebah. Indeed, she was better known by her agnomen, Umm Habeebah than by her name, Ramlah.

The Prophet of Allah (ﷺ) passed by her when she was in her prayer place-after the Fajr prayer-then he passed by her approximately halfway through the morning and she was still in her place of prayer. He said to her: “You are still in the place where I left you?” She replied: “Yes.” Thereupon Allâh’s Messenger (ﷺ) said:

“I recited four words three times after I left you and if these are to be weighed against what you have recited since morning, these would outweigh them; and they are:

Interested in similar books? Take a look at our suggestions below. 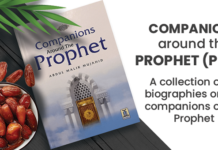 Companions around the Prophet ﷺ

Worship and its Concept in Islam

Interpretation of the meaning of the Noble Quran