Home Knowledge Fatwa: Its importance and Characteristics of a Mufti 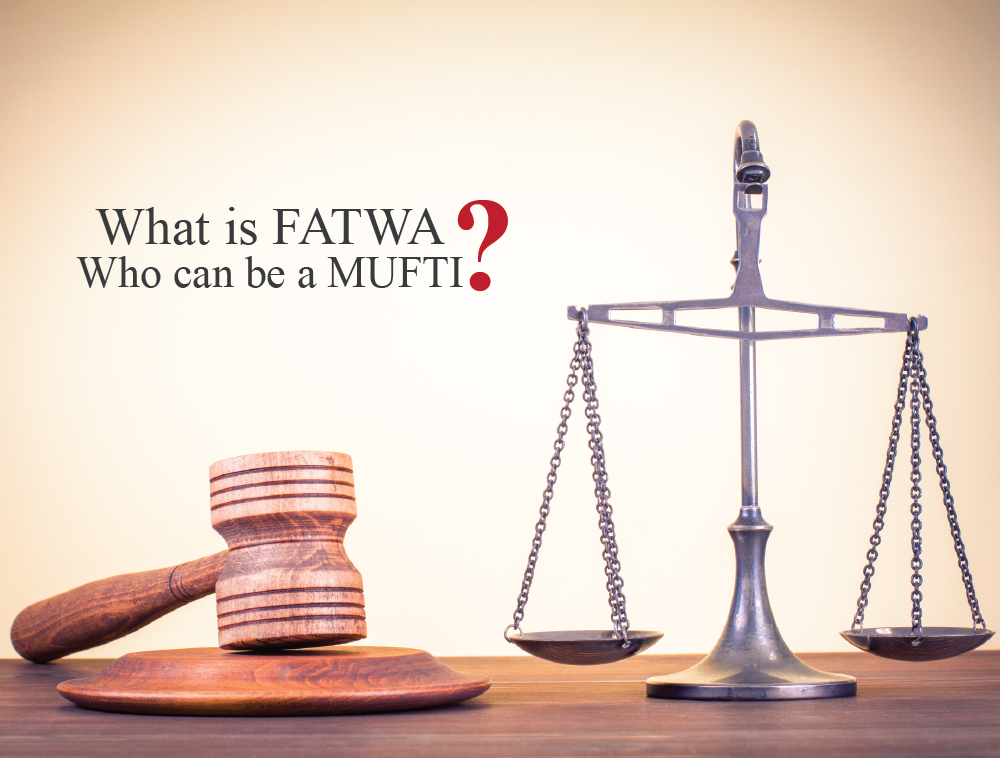 The word “fatwa” has been spoken about and widely used throughout media in the recent years, which commonly expresses and indicates that a death penalty has been announced to someone or to some people of the society. It is because of the misuse of this term that we find too much confusion about its meanings. It is not the declaration of war or to announce the death sentence but it is very important and honorable term in the Islamic law and Jurisdiction. It is basically the opinion of an Islamic Scholar, issued by an expert and competent in the Islamic religious law; who is called “Mufti”. He issues verdict about particular issues in the light of the Holy Quran, Sunnah and Ijma (consensus or agreement of the Muslim learned and pious Scholars on the religious issues).

Fatwa is derived from the basic root word “Fata”, which means an explanation or clarification of a specific issue according to three basic sources that mentioned above. The importance of Fatwa about the issues that occur in our daily lives cannot be denied by anyone in the society. One can ask learned, religiously well-known and pious scholars if he/she does not know or find any detail references about the issues, as Allah says:

Numerous verses in the Holy Quran highlight the importance of fatwa. Among those is this verse:

“They ask you for a legal verdict. Say: “Allah directs (thus) about Al-Kalalah (those who leave neither descendants nor ascendants as heirs)”. (An-Nisa’ 4:176)

Ifta (giving Fatwa) is an honorable position and a great rank. A “Mufti” (the one who gives fatwa) must be learned and pious person, because he is the inheritor of the Prophet PBUH in conveying the true Message of Islam in the form of rulings on different issues. And he must be mujtahid (one who is gifted and capable of knowing the secrets of the Quran and the Hadiths.).

“It is not allowed for anyone to give a fatwa (ruling on Shariah issues), except one who is entirely knowledgeable of the Holy Quran including the verses that are abrogated and by which verses they were abrogated, and which verses resemble each other in the Holy Quran and the chapters that revealed in Makkah or Madinah. He must know the whole collections of the Hadith of the Prophet (peace be upon him), both the authentic and the false (weak or fabricated). He must know the Arabic language of the time of the Prophet (peace be upon him) with its grammar and eloquence as well as know the poetry of the Arabs. Moreover, he must be aware of the culture of the various people who live in each different nation of the society. If one has all these attributes, he may tell and inform the people what is permitted (halal) and what is forbidden (haram). Otherwise he has no right to issue a fatwa.”

“Know that ifta` (giving Fatwa) is a weighty matter and an honourable position because a mufti is an heir of the prophet [peace be upon him], fulfilling a communal obligation.”  [ The Forty Hadiths of An-Nawai ]

It is reported that ‘Abdullah bin Al-Mubarak was asked, “When can a person issue a ruling?” He replied:

“When he is knowledgeable about the narrations (hadith and traditions of the Salaf), and has insight into [juristic] opinion.”

After Prophet’s (peace be upon him) death, his beloved companions were issuing the rulings according to the Quran and the Sunnah of the Prophet (Peace be upon him) as they were more knowledgeable of both sources. There are many companions whose rulings were preserved among them are: Umar bin Al-Khattab, Ali bin Abi Talib, Abdullah bin Masud, Aisha (the Mother of the Believers), zaid bin Thabit, Abdullah bin Abbas and Abdullah bin Umar. One can compile a huge book of rulings, which issued by each one of them (May Allah be pleased with them all). After them, this task was taken up by the genius and pious students of the companions of the Prophet PBUH. With the passage of time, this task was gradually undertook by such pious and sincere religious scholars in all parts of the world until our times.

According to the above detailed explanation of the term “fatwa” and “Mufti” one, who has no such attributes and qualities, should avoid and be aware of giving rulings about which he has no knowledge, Allah says:

Finally, we ask Allah to bless us with beneficial knowledge and good deeds, pray that He convey His religion through us and Bestow His blessings on our Prophet (peace be upon him), his family, his Companions and those who follow their way till the Day of Resurrection. Ameen

Revelation of the Holy Quran in the Best, Eloquence and the...

Justice and Equity in Islam

The End of the World