Once there was a taxi driver. Once he dropped some ladies at a cemetery. As he was returning, he caught sight of an old woman who was sitting by a grave in a corner. She was blind. The grave she was sitting at was that of her son. The time of Maghrib prayer was approaching and the sun was about to set.

Though he noticed her, he did not pay much heed to the old woman. Now his taxi was out of the cemetery and he drove it a bit away in search of fare. He didn’t know why the image of that old woman was appearing again and again in his mind. He was thinking as to what that old woman was doing in the cemetery while other people were returning home from their workplaces. What after all was she doing amidst graves? All of a sudden the steering wheel of his taxi was turned and he was headed towards the cemetery.

As he reached there, he saw the old woman still sitting at the same grave. He parked the taxi at the side and approached her. He asked her, “Dear mama! What are you doing here in the cemetery all alone?” She said, “I have come to visit the grave of my son.” He asked, “Would you like to let me drop you at your home.” The old woman smiled and said, “Son! May Allah give you a better reward in return! The thing is, my other son is about to come. He will take me home.”

When the taxi driver was sure that the old woman’s son was about to come to pick her up, he turned back. Though he returned home, his thoughts were still about the old woman. He could not understand why he felt a pang of remorse as to why he left her alone in the cemetery in the dark. The taxi driver regretted why he did not bring her home. He was ashamed fearing in the heart that the old woman might be harmed.

What the next day happened was exactly what the taxi driver had feared. It was talk of the town that a dead body had been found in the cemetery. Some wild animal killed her. He got into his taxi and rushed towards the place where he saw the same old woman lying on the ground under a black sheet. In fact when her son did not pick her up at night from the cemetery, she slept there. Later some fierce animal pounced on her killing her.

As for the old woman’s son, it was reported that he had grown weary of his old blind mother. Under the pretext of taking her to the cemetery to visit the grave of another son, the cruel son left her there and did not deliberately pick her up, leaving her to the mercy of wild animals. She fell prey to a wolf. The taxi driver returned from the cemetery wringing his hands, rebuking himself for not taking the woman home the previous night. Had he done so, the tragedy might have been avoided. He prayed for her.

One particular lesson in this story is that some people are so much wicked that they do not attach any value to the great blessing of the mother. They treat their mothers so abominably that they stand in the league of lost sheep and earn the curse of Allah, angels and His pious people till doomsday. May Allah Almighty give us the power to serve our parents as much as possible! 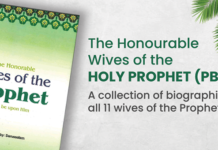 Modest than a Virgin

Taqwa (Fearing Allah) and its advantages in the Light of Sunnah...

Importance of Asr Prayer in Quran and Hadith